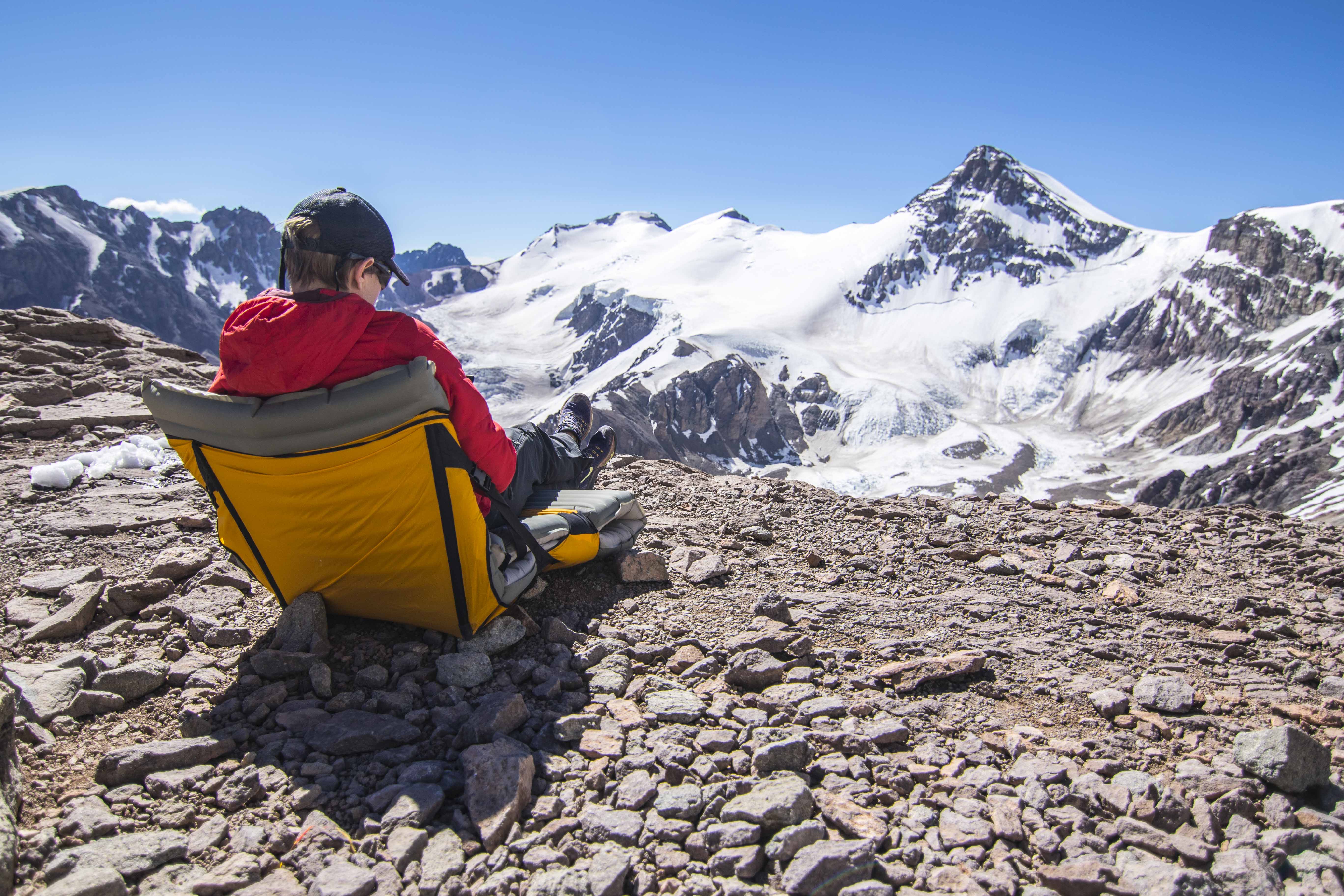 On Top Of The World

What happens when you end up on a three-week trip to attempt the highest peak in the Western hemisphere with four strangers? You quickly learn how to have fun while staying safe with your new team. After all, what other choice do you have?

In this edition of Therm-a-Rest Beta, contributor Sunny Stroeer gives us her lessons in fun and safety after an expedition to Aconcagua. Aconcagua, the second highest of the Seven Summits, stands 22,838 feet tall.  Some 3,000 people attempt the summit each year, and the normal route is little more than a high-altitude hike with a well-beaten path almost all the way to the summit.  Yet, the mountain is extremely physically demanding and subject to ferocious weather. Storms with wind speeds of 80 mph and temperatures down to -40 degrees Fahrenheit are not unusual.  Summit day can be a grueling ordeal, with over 12 hours of difficult, oxygen-starved forward progress.

Aconcagua’s non-technical nature and high popularity contribute to making it a very underestimated mountain. During the few weeks that we spent on the mountain this season, there were two tragic accidents and at least five near-misses.

I have to preface that none of our women’s team reached the summit on this trip. Having summited before, I started pondering the lessons I have learned from my time on the mountain.

After safety, what are the other essential skills needed for high-altitude expeditions? Are there guidelines to follow that can make a big mountain trip as enjoyable as possible? I’ve listed out a few things that I’ve found separate a good team from a great one. 1. Healthy team norms are the foundation of a fun and supportive trip.  We were a team of four strong women, all with their own set of legitimate backcountry experiences and skills. There was Libby Sauter, a Yosemite big-wall rock star who currently holds the female speed record on the Nose; Teresa, a rocket-scientist-turned-ski-bum whose spunk knows no limits; Kristina, a wicked strong and wicked funny ultra-running and ski-mountaineering weekend warrior queen; and myself, who had already climbed Aconcagua once two years prior, joining a group of very few women to succeed on the mountain solo and unsupported. We had assembled a team of type-A personalities, and it’s easy to imagine how we could have slipped into intra-team competitiveness. Instead, Kristina prompted an important conversation early on during the approach hike to basecamp: “How do you act when you’re not feeling good?  What happens when you’re down?  When things are going downhill, what can the rest of us do to make sure that you’re ok?”  That conversation set us up as a team to be open about our concerns and to support one another; it set the stage for candid discussions and smart, participative decision-making. 2. Acclimatization cannot be rushed.  The mountain does not care about your schedule.  We knew that we would need about about ten days of acclimatization before being ready to try the summit. Looking at the forecast, we were tempted to rush into a faster summit attempt: tagging the summit on a mountain like Aconcagua depends on favorable weather conditions as high winds and extremely cold temperatures make it near impossible to climb during periods of bad weather. Now a razor-thin two-day weather window offered summit chances amid otherwise stormy and cold conditions that would close off the upper mountain.  We knew that this particular weather window was early for our acclimatization schedule, but we had no way of knowing if we’d get another window if we decided to sit this one out. “Let’s just go for it! We’re in position. What do we have to lose?” – “There’s no way, we’re not well-enough acclimatized; we could get ourselves in serious trouble if we push too hard too soon.” Team consensus on the viability of an early summit push flip-flopped like a fish caught in a bucket.  In the end, we had to admit to ourselves that none of us four were well-enough acclimatized yet where an early summit bid was realistic; we beat retreat from Camp II down to basecamp and sat out the approaching bad weather, hoping for another window before we would have to return to the US. 3. Sleep is critical.  Sleep is the body’s mechanism to recover.  If you’re not sleeping well, you’re bound to acclimatize more slowly and take longer to get your strength back after humping a heavy backpack several thousand feet up the mountain to establish your next camp.  A single night of poor sleep can set you back massively – like the one time at Camp I when I was sitting up most of the night and supporting the tent wall with my back because the wind gusts were so strong that I was scared the poles on my TNF Assault tent were going to snap (which they finally did, though thankfully not until the last morning at high camp several days later).  Aside from avoiding wind storms, there are several factors that can help you sleep well on a mountain: 4. Nutrition makes all the difference.  The amount of calories that you need to function at a high level amid brutal cold and thin air is mind blowing; during my first Aconcagua summit day in 2014 I burned an estimated 8,000 calories over the course of eighteen hours. I also lost 16 pounds in 16 days during that trip, and not on purpose! But that’s a different story.
Staying fueled is complicated; most people’s appetite tends to decrease with altitude, and cooking food in a tent is a hassle. As such, it’s important to have a good system: 5. There is no substitute for deliberate decision making.  In the end, reaching the summit does not mean success; it’s all about getting home safely.  In fact, reaching the summit by a thread and barely making it back down is a much less desirable outcome than it is to turn around and abandon a summit bid based on robust, systematic decision-making.  After all, if your decision-making isn’t systematic and deliberate, how will you differentiate if you got down off the mountain due to skill or merely due to luck?
Situational awareness is core and center to deliberate decision-making in the mountains – you have to be constantly assessing your environment as well as the physical and mental state that you and your teammates are in, and you have to be willing to adjust plans to match new information as it becomes available (such as an updated weather forecast or a teammate’s changing health).  The summit is not the ultimate goal – don’t succumb to the temptation to treat it as such. During our women’s expedition, we had to make a series of difficult calls including a weather window which we passed up and unplanned sick days at basecamp.  We finally abandoned the climb altogether, and yet we all walked away from the trip with the feeling of having accomplished something big. Three weeks of cold, altitude, sickness, hard work and no summits brought us much closer together than I think any of us had expected going into the trip. We supported each other through our ups and downs, picked up each other’s slack, stayed safe, and most importantly had lots of fun through most, if not all, of it. We may not have reached the summit, but we sure had great fun and made great friends.

I am a free spirit and adventurer. Formerly a hard-charging strategy consultant, I turned my back on material possessions and career shortly after turning 30 and have been living in an Astrovan to run and climb full-time ever since.