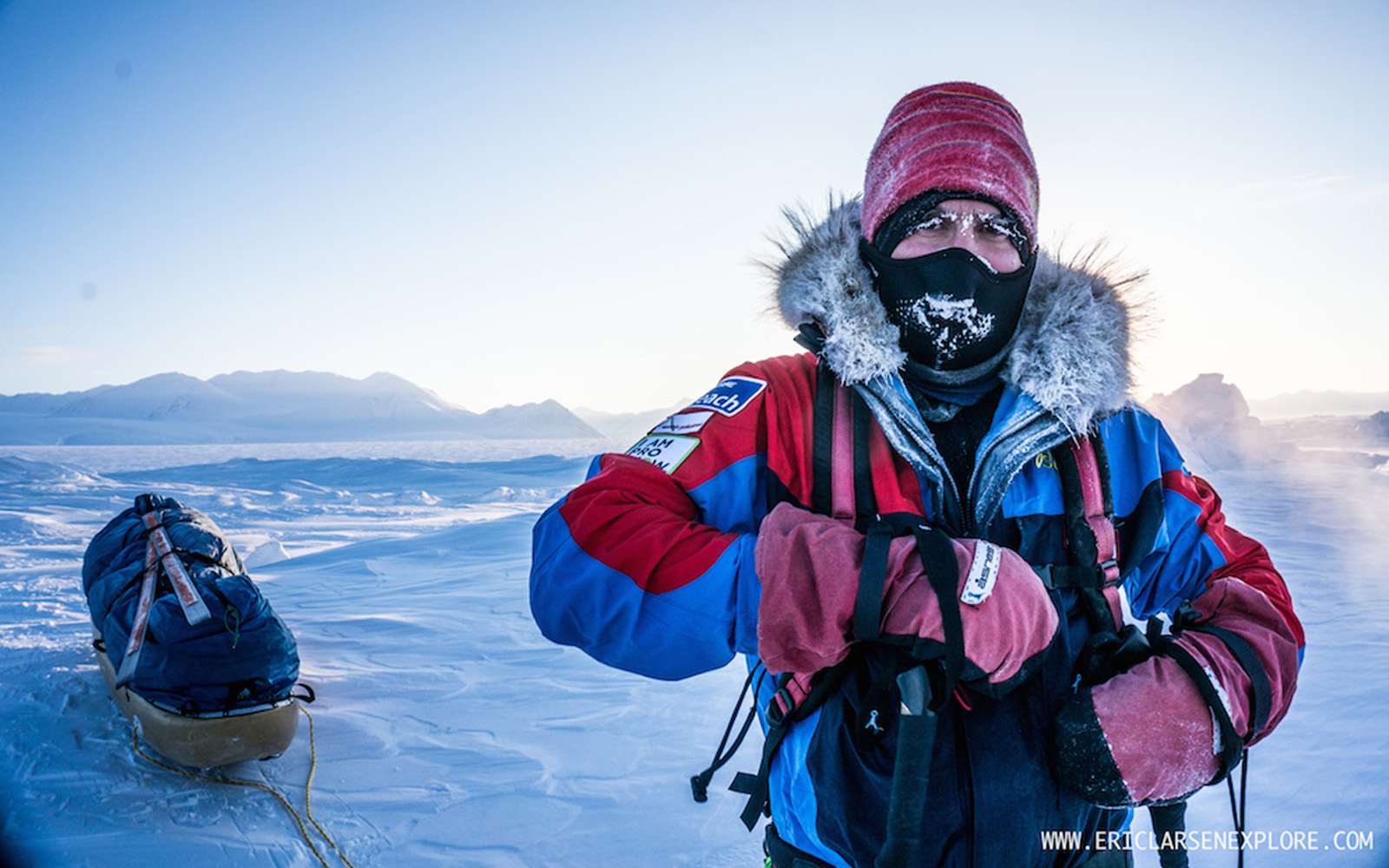 During Eric Larsen’s unsupported and unaided trek to the North Pole in 2014, there was a daunting moment when he and his partner Ryan Waters realized … they weren’t alone.

“We had two polar bears—a mom and a cub—following us for a quarter mile or so,” says Larsen, “but we didn’t hear them coming. When we turned around, they were right behind us.”

The hungry bears weren’t easily deterred either, and kept approaching the explorers despite the flares they fired. When they reached 15 feet, Larsen finally pulled the gun, and shot off a round of “bear scare.”

The bears finally scampered off, but that encounter made Larsen question whether he and Waters would “make it out.”

“You can’t dwell on it too much but it’s something that is on your mind,” says Larsen.

The explorers pushed on, however, and eventually crossed the Arctic Ocean from Northern Ellesmere and reached the North Pole, accomplishing what Larsen considers his hardest expedition to date.

And that’s coming from someone who in 2009 alone, journeyed to the South Pole, North Pole and the summit of Mount Everest.

Larsen, who grew up adventuring, is drawn to the extreme ends of the earth. But it’s his love of camping and sleeping in the outdoors that drives him.

“I judge the quality of my life by how many nights I spend in a tent each year,” he says.

As part of the Therm-a-Rest family, Larsen knows what it takes to get a good night’s rest in the outdoors. Check out this Q&A with him and get stoked to go on your own adventure.

Where do you live?

Boulder, Colorado, but I’m still a midwesterner on the inside.

Being a dad is easily at the top of my list. Everything else pales in comparison! Adventure-wise, I’ve always said that the most difficult part of any adventure is simply getting to the starting line. So if you look at any of my big expeditions, just the fact that I was able to pull them off is a huge accomplishment. South Pole, North Pole and Everest in one year was a pretty big deal—nearly six months in a tent in the coldest places in the world. My Everest summit was also only one of three fall summits in the past 15 years! How did you get your start?

I wish I had some specific moment where everything just “clicked,” but for better or worse, I’ve been involved with one adventure or another since I was a kid. My family was big into the outdoors so there were a lot of camping trips growing up. However, as soon as I was in high school, I was organizing my own canoe trips. After college, I got a job as a backcountry ranger in Alaska, then guiding white water trips in Colorado, then I stumbled into dog mushing, which I did for nearly 10 years—guiding, doing expeditions and racing. It was with dog-sledding that I first got exposed to bigger expeditions and then transitioned into human powered adventures (versus dog powered).

Can you tell us a little about why you started exploring cold places?

I’m from Wisconsin originally so we didn’t really have mountains or oceans, but we did have winter, so I was always relatively comfortable in the cold. Ultimately, my expeditions started as a way to connect people to cold places—I felt that the story of an adventure was a powerful tool to engage people in bigger conversations about the environment, perseverance and more. Still the “why” has always been a bit difficult for me to answer. A big part of this is just who I am and my expeditions are simply a form of self-expression. I stopped asking “why” a long time ago.

What was your first polar trip?

Which Poles/areas intrigue you more … and why?

I am fascinated by so many places. I love looking at a map and wondering about what that place might look like. Polar-wise, I am continuously drawn back to the Arctic. It is one of the most severe and extreme environments on the planet and it’s also a place that few people really understand. It’s also a place that is changing dramatically. That is a good question because I’m not really sure. For better or worse, this is just how I was built. I am curious about the natural world and I love the physical and mental challenges of long expedition travel. However, my biggest motivation now is to connect people to places, frozen places most specifically—before they are all gone. I know that not everybody has the physical ability or emotional drive to go on big expeditions to these places, but that doesn’t mean they aren’t curious about what they are like and how they are changing. My ultimate goal is to create an overall “experience” that engages people in conversations about how we use resources, ways in which we can not only protect but also enjoy our natural environment.

I got my first Therm-a-Rest mattress in 1987. It was purple and I believe that was one of the first years that the valves were switched from brass to plastic. I had that thing for 20 years and ended up giving it to a friend only because I got a new one for an expedition. Today, Therm-a-Rest products are still integral parts of my adventures. For big polar expeditions, we base our travel schedule around trying to get eight hours of sleep. Being comfortable and warm during that eight hours if vital to our success.

What is your philosophy about selecting gear for your adventures?

I choose my gear based of three basic principles:

What is your favorite Therm-a-Rest product?

Would I be too boring if I said the RidgeRest? I LOVE Ridge Rests—they last forever, and never fail. After that, I’m a HUGE fan of the TREO chairs. It’s easily the best camp chair I’ve ever used! Do you pack along a creature comfort while on your expeditions?

Because our trips are often so long and difficult there isn’t a lot of room for spoiling yourself with extras. I’m a pretty nuts-and-bolts kind of a guy. So these days, it’s an iPhone loaded with podcasts. If I can bring my big DSLR camera, I’m usually psyched as well because I love taking pictures of snow and ice.

What was your coldest moment? Or coolest cold moment?

One of the things that people are always surprised to learn about me is that I don’t like being cold. I like being warm in the cold. During any expedition there are times nearly every day when you are freezing your you-know-what-off. On North Pole expeditions, mornings are especially brutal as you have to get out of a three-layer sleeping bag, brush all the frost off the tent and bags, and bring the bags outside. It can be as cold as 40 or 50 below in the tent and you’re just sitting there shivering in your base layers. It’s not much fun.

What advice do you have for people just starting out?

Big adventures can be daunting. My advice always starts with one of my favorite phrases, “begin with one step.” It doesn’t matter what the goal is, by taking the big problem and breaking it into manageable pieces, you can actually accomplish a lot of difficult things. After that? Don’t be afraid to make mistakes or fail. 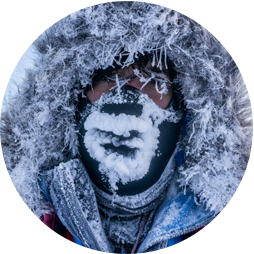 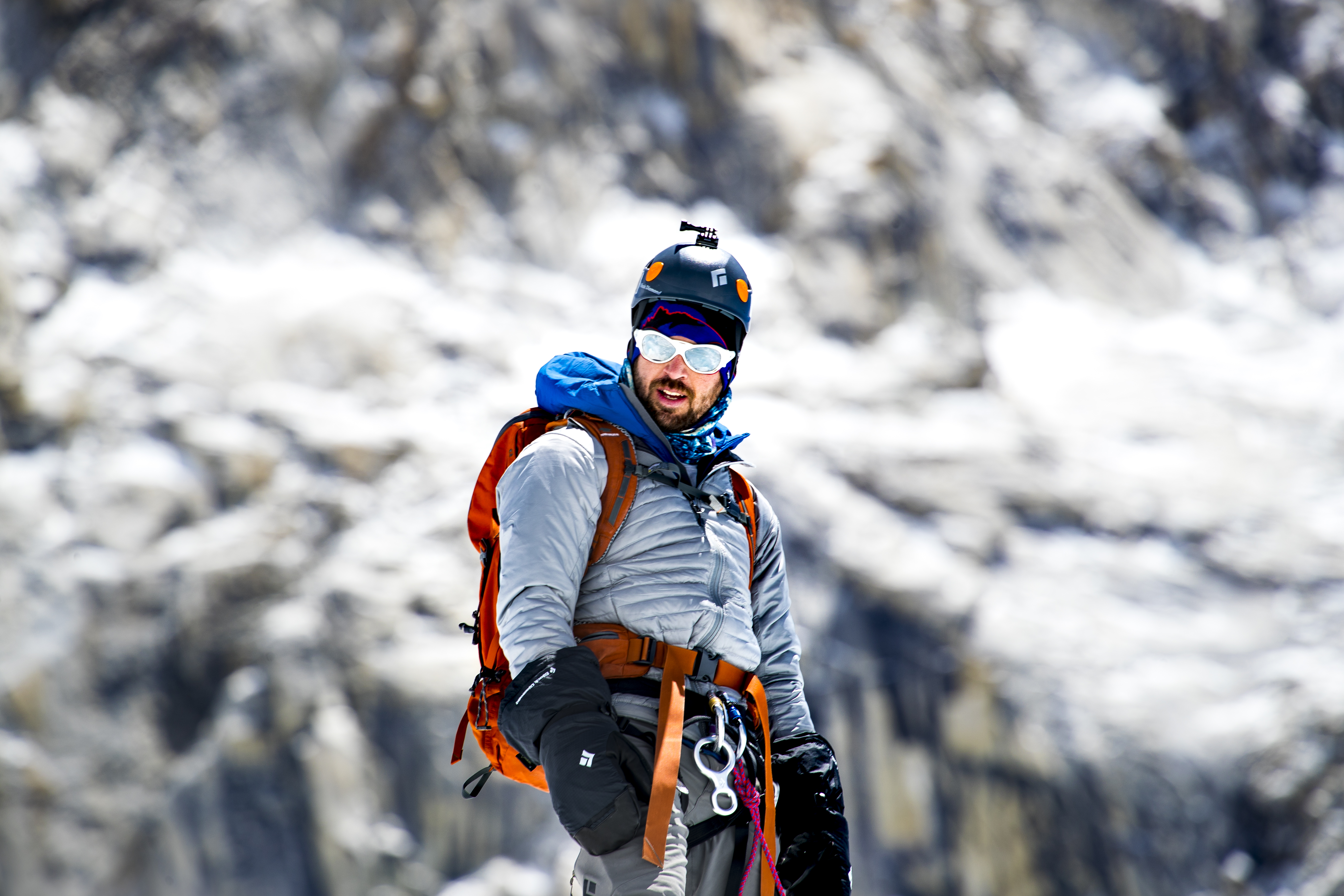 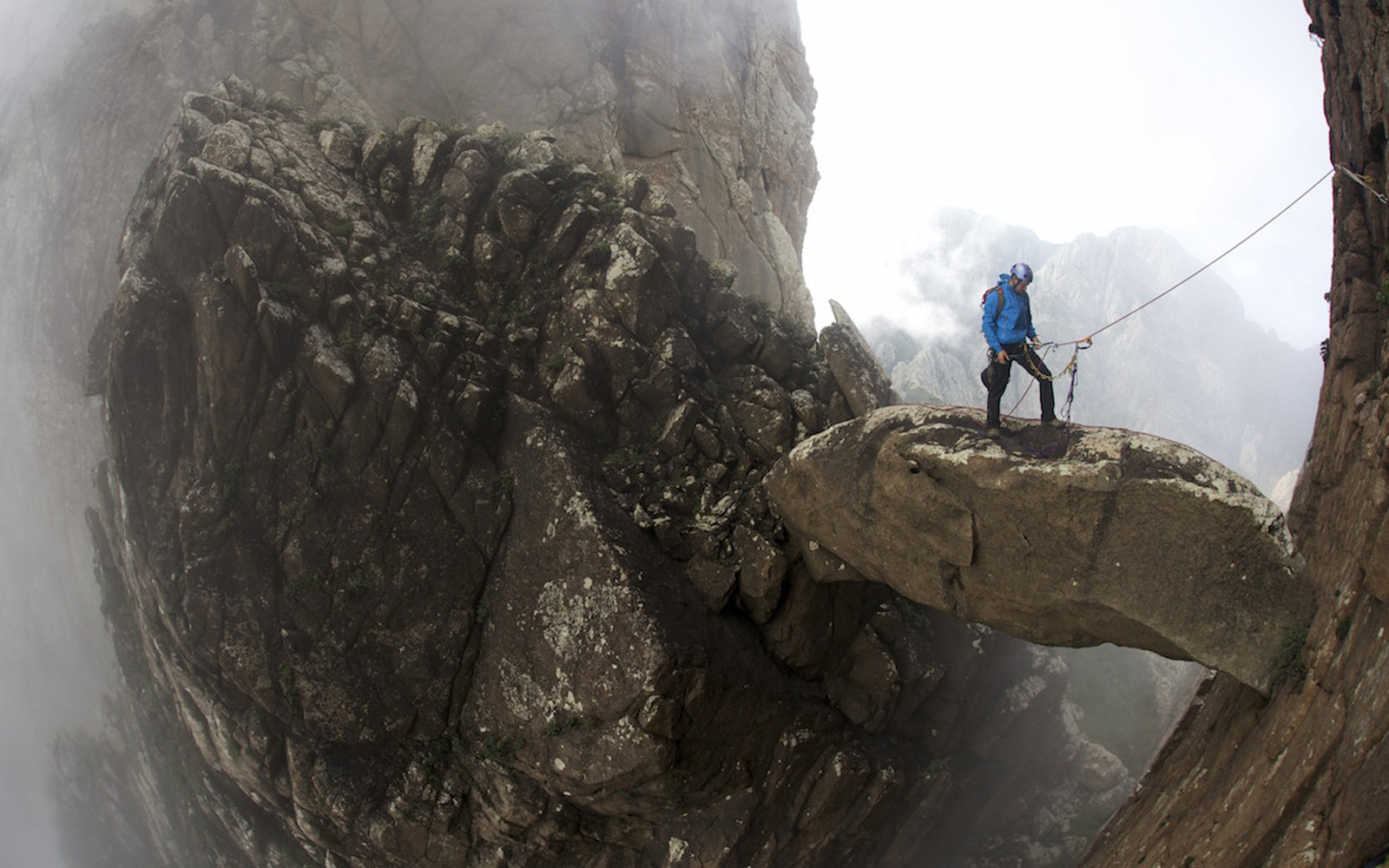 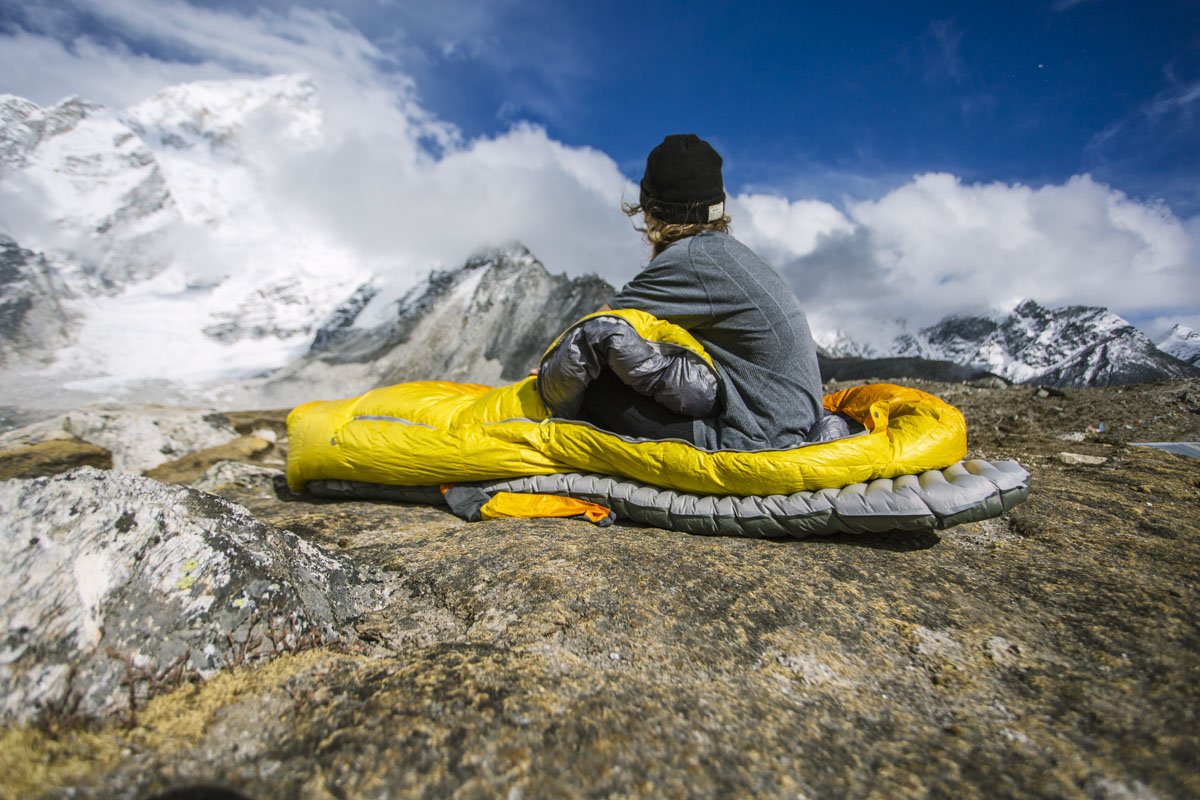